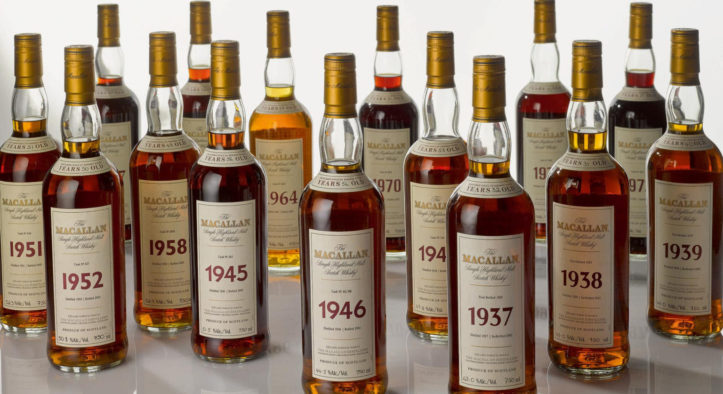 Auction house Sotheby’s is hosting two online sales this month, one dedicated to rare spirits, and the other to fine wine.

Bidding on the whiskies began on 6 April and will remain open until 19 April. There are 30 bottles in total, all from The Macallan’s ‘Fine & Rare series and all consigned from specialty retailer Wing Hop Fung in Los Angeles.

The whiskies span five decades from 1937 to 1972, each bottle in its original wooden case. They were purchased as a set from The Macallan in 2005 and have certification to prove their provenance.

“Macallan is, undoubtedly, the world’s most collectable whisky and at the core of its most coveted expressions is the Fine & Rare collection. This collection achieved its cult status due to a number of qualities: vintages that stretch back to before the Second World War, age statements that exceed half a century and undeniable quality throughout. It is only the most savvy and determined of whisky collectors who have been able to build a truly comprehensive collection of Fine & Rare bottlings over the years, and it is rare to find one with such provenance. It is not only an honour for Sotheby’s to bring these bottles to auction, but an exciting opportunity for any collector to be able to build and complete their own meaningful collection of The Macallan Fine & Rare.”

Then, taking place from 13-26 April, the auctioneer will host an online fine wine sale, at the heart of which is a collection from an important New England cellar”, featuring the great wines and vintages  from Domaine de la Romanée-Conti, Domaine Leroy, Domaine Comte Georges de Vogüé, Château Latour, Château Mouton Rothschild and Giacomo Conterno among others.